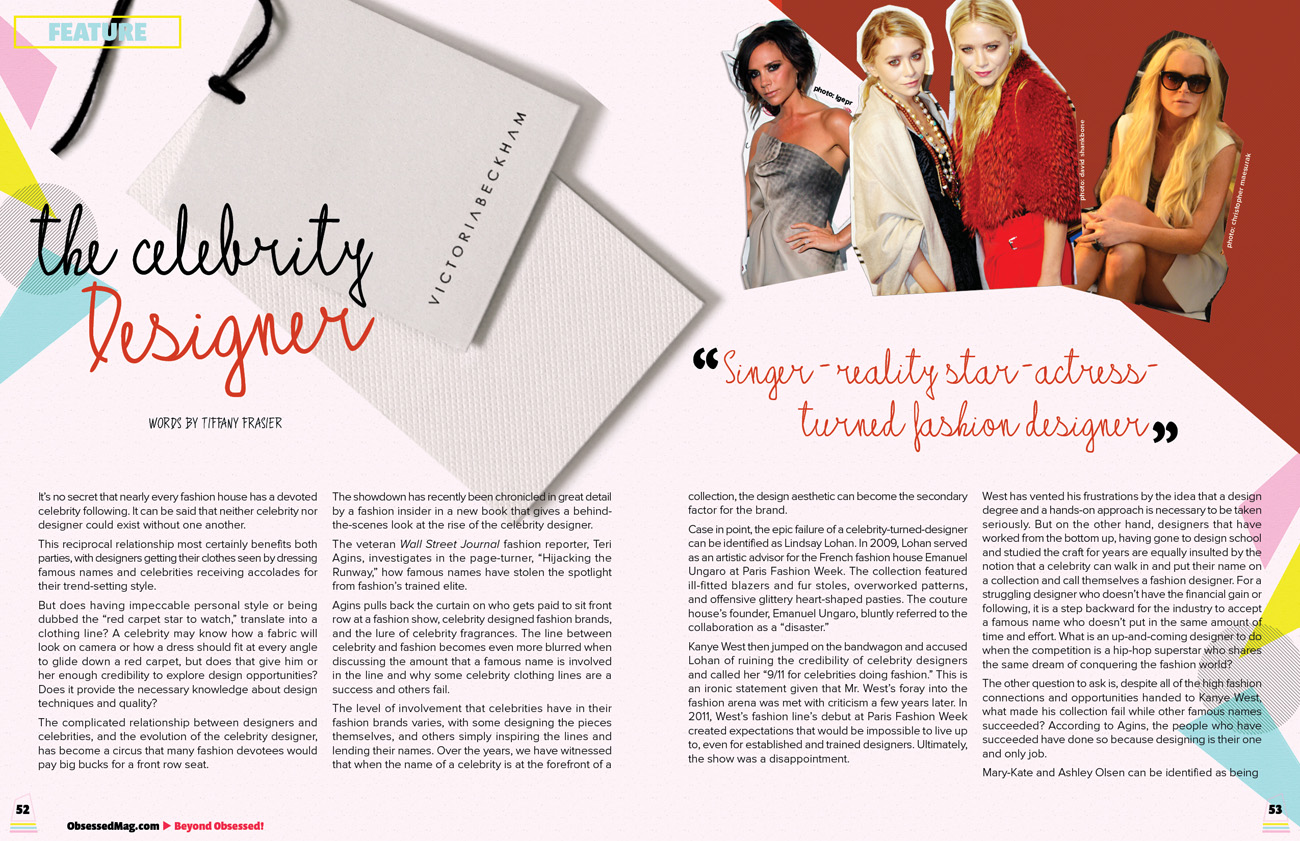 It’s no secret that nearly every fashion house has a devoted celebrity following. It can be said that neither celebrity nor designer could exist without one another.

This reciprocal relationship most certainly benefits both parties, with designers getting their clothes seen by dressing famous names and celebrities receiving accolades for their trend-setting style.

But does having impeccable personal style or being dubbed the “red carpet star to watch,” translate into a clothing line? A celebrity may know how a fabric will look on camera or how a dress should fit at every angle to glide down a red carpet, but does that give him or her enough credibility to explore design opportunities? Does it provide the necessary knowledge about design techniques and quality?

The complicated relationship between designers and celebrities, and the evolution of the celebrity designer, has become a circus that many fashion devotees would pay big bucks for a front row seat.

The showdown has recently been chronicled in great detail by a fashion insider in a new book that gives a behind-the-scenes look at the rise of the celebrity designer.

Agins pulls back the curtain on who gets paid to sit front row at a fashion show, celebrity designed fashion brands, and the lure of celebrity fragrances. The line between celebrity and fashion becomes even more blurred when discussing the amount that a famous name is involved in the line and why some celebrity clothing lines are a success and others fail. 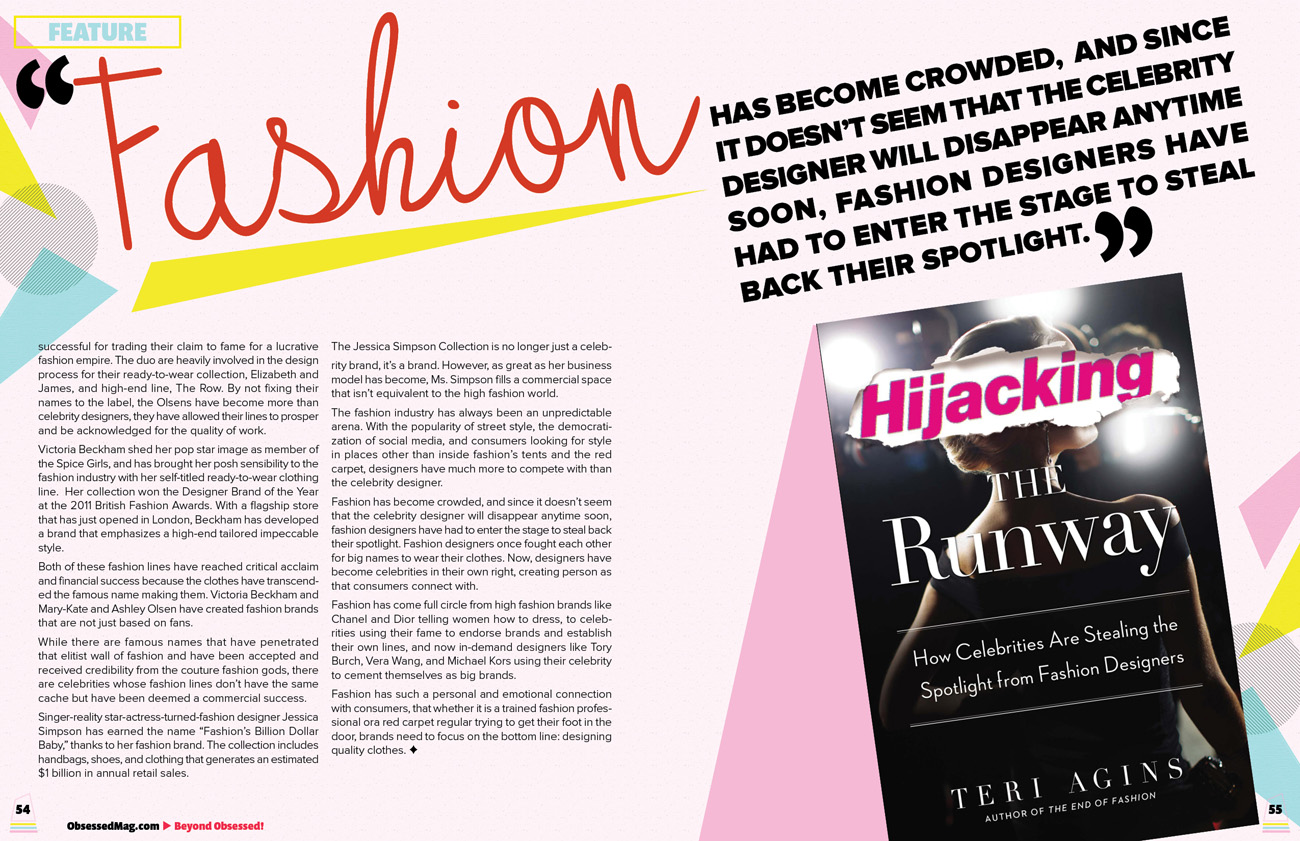 The level of involvement that celebrities have in their fashion brands varies, with some designing the pieces themselves, and others simply inspiring the lines and lending their names. Over the years, we have witnessed that when the name of a celebrity is at the forefront of a collection, the design aesthetic can become the secondary factor for the brand.

Case in point, the epic failure of a celebrity-turned-designer can be identified as Lindsay Lohan. In 2009, Lohan served as an artistic advisor for the French fashion house Emanuel Ungaro at Paris Fashion Week. The collection featured ill-fitted blazers and fur stoles, overworked patterns, and offensive glittery heart-shaped pasties. The couture house’s founder, Emanuel Ungaro, bluntly referred to the collaboration as a “disaster.”

Kanye West then jumped on the bandwagon and accused Lohan of ruining the credibility of celebrity designers and called her “9/11 for celebrities doing fashion.” This is an ironic statement given that Mr. West’s foray into the fashion arena was met with criticism a few years later. In 2011, West’s fashion line’s debut at Paris Fashion Week created expectations that would be impossible to live up to, even for established and trained designers. Ultimately, the show was a disappointment.

West has vented his frustrations by the idea that a design degree and a hands-on approach is necessary to be taken seriously. But on the other hand, designers that have worked from the bottom up, having gone to design school and studied the craft for years are equally insulted by the notion that a celebrity can walk in and put their name on a collection and call themselves a fashion designer. For a struggling designer who doesn’t have the financial gain or following, it is a step backward for the industry to accept a famous name who doesn’t put in the same amount of time and effort. What is an up-and-coming designer to do when the competition is a hip-hop superstar who shares the same dream of conquering the fashion world?

The other question to ask is, despite all of the high fashion connections and opportunities handed to Kanye West, what made his collection fail while other famous names succeeded? According to Agins, the people who have succeeded have done so because designing is their one and only job.

Mary-Kate and Ashley Olsen can be identified as being successful for trading their claim to fame for a lucrative fashion empire. The duo are heavily involved in the design process for their ready-to-wear collection, Elizabeth and James, and high-end line, The Row. By not fixing their names to the label, the Olsens have become more than celebrity designers, they have allowed their lines to prosper and be acknowledged for the quality of work.

Victoria Beckham shed her pop star image as member of the Spice Girls, and has brought her posh sensibility to the fashion industry with her self-titled ready-to-wear clothing line.  Her collection won the Designer Brand of the Year at the 2011 British Fashion Awards. With a flagship store that has just opened in London, Beckham has developed a brand that emphasizes a high-end tailored impeccable style.

Both of these fashion lines have reached critical acclaim and financial success because the clothes have transcended the famous name making them. Victoria Beckham and Mary-Kate and Ashley Olsen have created fashion brands that are not just based on fans.

While there are famous names that have penetrated that elitist wall of fashion and have been accepted and received credibility from the couture fashion gods, there are celebrities whose fashion lines don’t have the same cache but have been deemed a commercial success.

The Jessica Simpson Collection is no longer just a celebrity brand, it’s a brand. However great her business model has become, Ms. Simpson fills a commercial space that isn’t equivalent to the high fashion world.

The fashion industry has always been an unpredictable arena. With the popularity of street style, the democratization of social media, and consumers looking for style in places other than inside fashion’s tents and the red carpet, designers have much more to compete with than the celebrity designer.

Fashion has become crowded, and since it doesn’t seem that the celebrity designer will disappear anytime soon, fashion designers have had to enter the stage to steal back their spotlight. Fashion designers once fought each other for big names to wear their clothes. Now, designers have become celebrities in their own right, creating personas that consumers connect with.

Fashion has come full circle from high fashion brands like Chanel and Dior telling women how to dress, to celebrities using their fame to endorse brands and establish their own lines, and now in-demand designers like Tory Burch, Vera Wang, and Michael Kors using their celebrity to cement themselves as big brands.

Fashion has such a personal and emotional connection with consumers, that whether it is a trained fashion professional or a red carpet regular trying to get their foot in the door, brands need to focus on the bottom line: designing quality clothes. Howling and stepping out of the shadow of her father, Lenny Kravitz, is daughter Zoë Kravitz, who is not only gaining recognition...

August 2, 2015
Copyright 2017 Meets Obsession Media LLC. All Right Reserved.
Back to top
X
Work it Out: Seven Versatile Pieces You Can Wear In (and Out of) the Gym…ActivewearThere is no greater time-suck than having to change your outfit before leaving the gym in fear of subjecting the outside world with the sight of your …