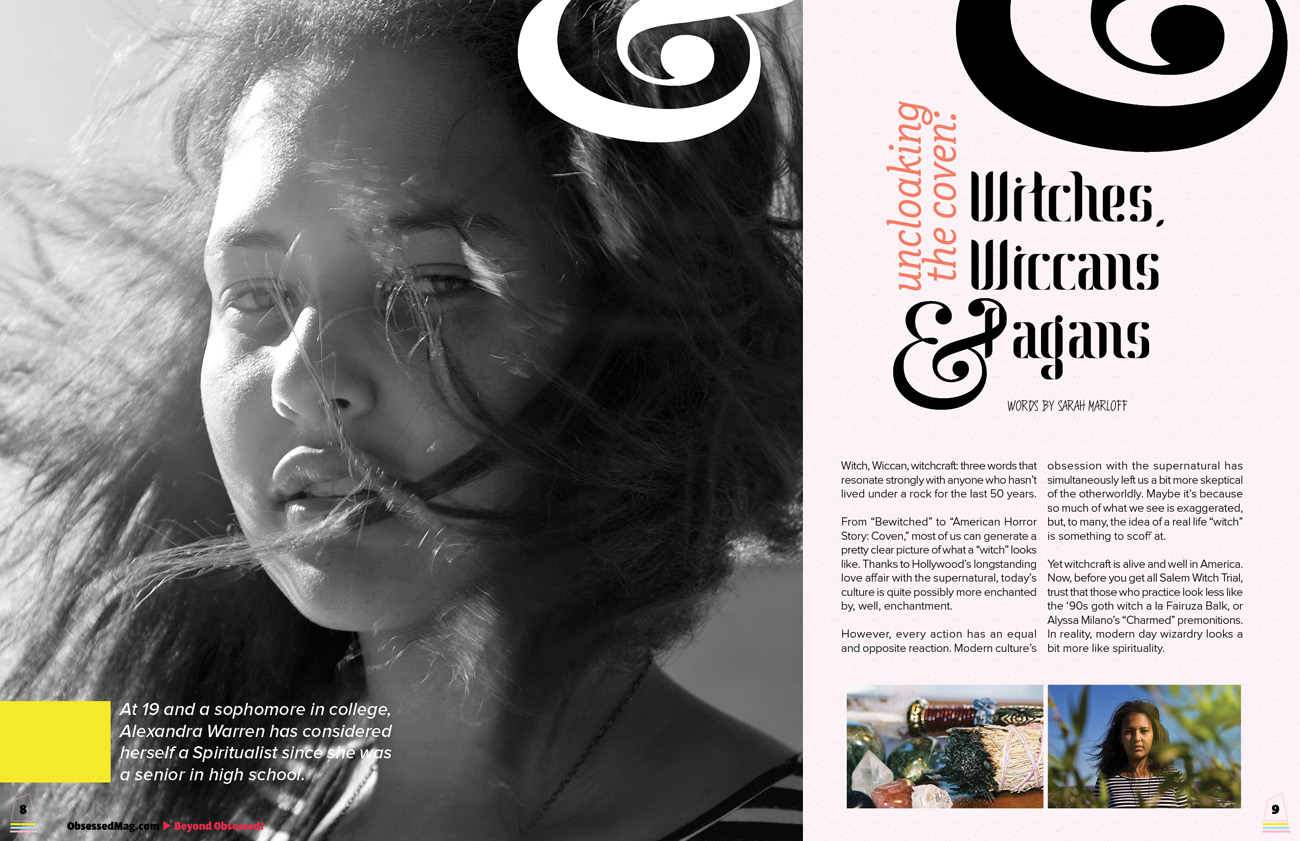 Witch, Wiccan, witchcraft: three words that resonate strongly with anyone who hasn’t lived under a rock for the last 50 years. From “Bewitched” to “American Horror Story: Coven,” most of us can generate a pretty clear picture of what a “witch” looks like. Thanks to Hollywood’s longstanding love affair with the supernatural, today’s culture is quite possibly more enchanted by, well, enchantment.

However, every action has an equal and opposite reaction. Modern culture’s obsession with the supernatural has simultaneously left us a bit more skeptical of the otherworldly. Maybe it’s because so much of what we see is exaggerated, but, to many, the idea of a real life “witch” is something to scoff at.

Yet witchcraft is alive and well in America. Now, before you get all Salem Witch Trial, trust that those who practice look less like the ‘90s goth witch a la Fairuza Balk, or Alyssa Milano’s “Charmed” premonitions. In reality, modern day wizardry looks a bit more like spirituality.

“It’s about trusting in the universe, and trusting that everything happens for a reason,” says Alexandra Warren. At 19 and a sophomore in college, Warren has considered herself a Spiritualist since she was a senior in high school. “We believe that the energies we have are deeper than our surfaces, and that we don’t just go away after we die. Instead, that energy just shifts.”

A daughter of a Jamaican father and a French mother, Warren credits her parents for establishing the root system of her beliefs. Before becoming a lawyer, her mother spent years practicing to become a medium—someone who can tune into people’s energy in order to offer insight into their state of being.

Though she never felt Spiritualism was forced upon her, Warren acknowledges that she’s been involved with it her entire life. “As my sister and I got older, we got more and more curious and more and more into it. It’s almost like a hippy’s take on Christianity.”

Conveniently, very near to Warren’s hometown is Lily Dale. Located in upstate New York, this seemingly magical township houses a spattering of registered mediums, and a general safe space for Spiritualists to practice, take solace, and further their knowledge with daily lectures and demonstrations.

However, meeting with mediums—like a modern day confessional—is just part of how Warren practices. “I believe in the Boomerang Affect,” she says. “Meaning, what you put out, you get back. In my practice, I try to give what I want to receive.” As a physical reminder, Warren keeps a personal altar. On it, she places only things with personal significance and meaning, including candles and her favorite flowers, orchids, which have a calming effect on the college student.

Despite her belief in both mediums and pantheism, Warren points out that she does not self-identify as a Wiccan. More to do with spells and magic, the practice of Wiccanism goes one step further than Spirituality. Or, as Warren explains, “A Wiccan is to an Orthodox Catholic what Spirituality is to a modern Methodist.”

Like most things having to do with the soul, witchcraft offers no clear and precise definition. Unlike Christianity, there is no single catchall term to define those who practice. However, the belief and extent of magic used does seem to generate a clear divide amongst believers. 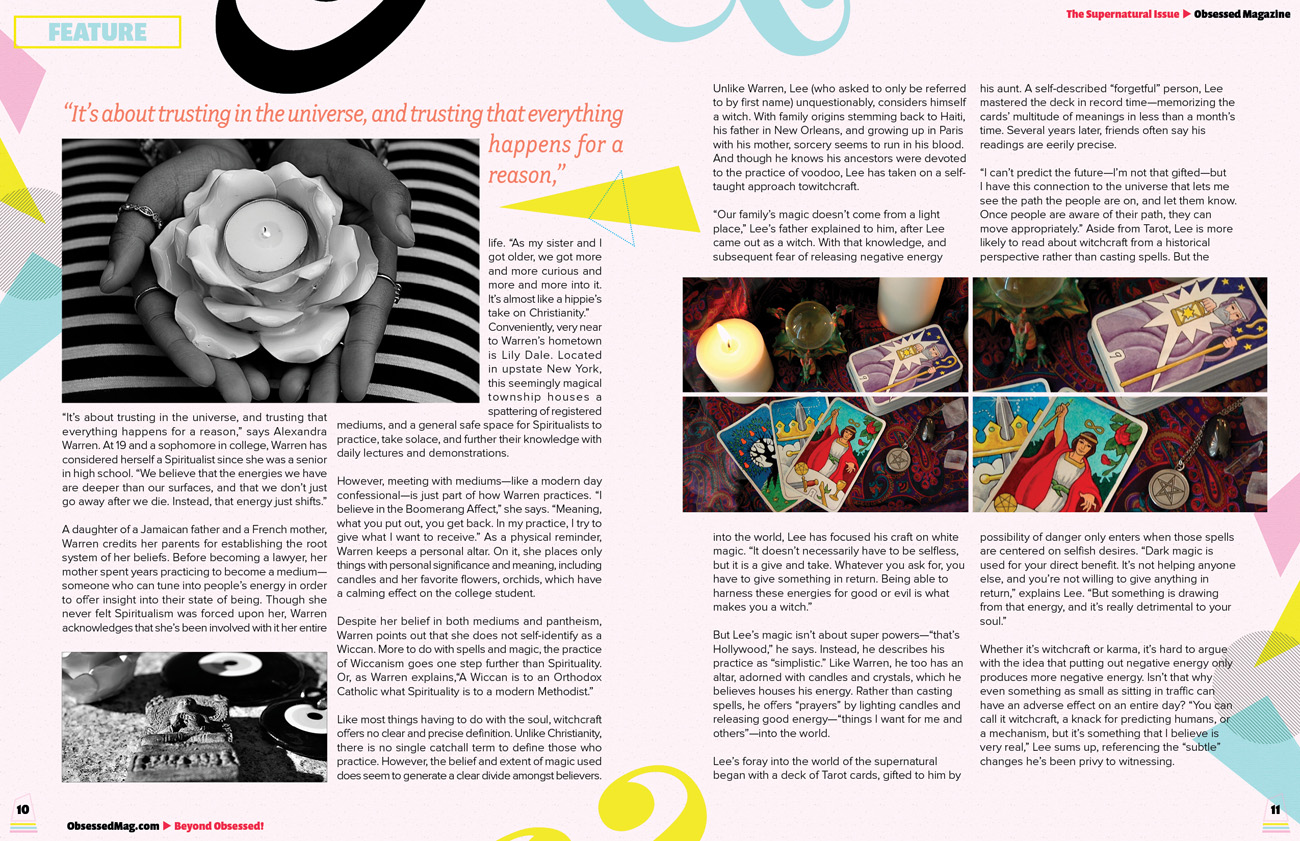 Unlike Warren, Lee (who asked to only be referred to by first name) unquestionably, considers himself a witch. With family origins stemming back to Haiti, his father in New Orleans, and growing up in Paris with his mother, sorcery seems to run in his blood. And though he knows his ancestors were devoted to the practice of voodoo, Lee has taken on a self-taught approach to witchcraft.

“Our family’s magic doesn’t come from a light place,” Lee’s father explained to him, after Lee came out as a witch. With that knowledge, and subsequent fear of releasing negative energy into the world, Lee has focused his craft on white magic. “It doesn’t necessarily have to be selfless, but it is a give and take. Whatever you ask for, you have to give something in return. Being able to harness these energies for good or evil is what makes you a witch.”

But Lee’s magic isn’t about super powers—“that’s Hollywood,” he says. Instead, he describes his practice as “simplistic.” Like Warren, he too has an altar, adorned with candles and crystals, which he believes houses his energy. Rather than casting spells, he offers “prayers” by lighting candles and releasing good energy—“things I want for me and others”—into the world.

Lee’s foray into the world of the supernatural began with a deck of Tarot cards, gifted to him by his aunt. A self-described “forgetful” person, Lee mastered the deck in record time—memorizing the cards’ multitude of meanings in less than a month’s time. Several years later, friends often say his readings are eerily precise.

“I can’t predict the future—I’m not that gifted—but I have this connection to the universe that lets me see the path the people are on, and let them know. Once people are aware of their path, they can move appropriately.” Aside from Tarot, Lee is more likely to read about witchcraft from a historical perspective rather than casting spells. But the possibility of danger only enters when those spells are centered on selfish desires. “Dark magic is used for your direct benefit. It’s not helping anyone else, and you’re not willing to give anything in return,” explains Lee. “But something is drawing from that energy, and it’s really detrimental to your soul.” Whether it’s witchcraft or karma, it’s hard to argue with the idea that putting out negative energy only produces more negative energy. Isn’t that why even something as small as sitting in traffic can have an adverse effect on an entire day? “You can call it witchcraft, a knack for predicting humans, or a mechanism, but it’s something that I believe is very real,” Lee sums up, referencing the “subtle” changes he’s been privy to witnessing.

“Recently, I asked this Higher Power for professional success,” says Lee, offering an example. “I did a ritual where I sacrificed my vanity. I stopped myself from letting my vanity control me, and two weeks later I got an amazing job opportunity.”

While both Lee and Warren are somewhat private about their beliefs and their practice, they acknowledge the existence of real life covens. Similar to a church congregation, in neo-pagan culture, a coven is simply a community of witches. Such groups intrigue Lee, who says he’d love to be part of a coven. “It’s a bunch of people who share the same mindset. I feel like—if I had a group of likeminded people—I’d be able to do more and explore more of witchcraft.”

Even if a coven would allow Lee, and all solo practicing witches, a chance to dig deeper into their gifts, it wouldn’t look like the movies. “Shows like “American Horror Story” and “Charmed” have given [paganism] a Hollywood approach. No one wants to make a movie about how I practice witchcraft,” jokes Lee.

With a skeptical lens on Hollywood, Warren blames horror movies for making people afraid of non-traditional belief structures. “Spirituality doesn’t believe in negative energy, at least not the way it’s represented in movies like “The Conjuring”. It can’t be transferred like that,” she explains, noting that some of her friends are scared to get readings from her mother. “The media has turned Wiccanism into something to be feared.”

Like any other religion—organized or not—witchcraft, paganism, and spiritualty look different on everyone. And how far one goes is up to the individual. “I don’t draw stars or make sacrifices,” says Lee. “It’s like how some people go to church and pray; I’m getting in touch with something that’s intangible and it’s a really spiritual experience for me. Life can be so harsh sometimes, that—even if it is total bullshit—it helps make sense of it all.”

“I don’t want to live in a world where we cope through our iPhones and don’t search ourselves for how we’re feeling,” Lee continues. For him, witchcraft is not only a way of healing and hoping for good things; it’s also a means for self-exploration. The practice pushes him to look deeper into himself to discover new personal depths.

Spirituality provides Warren that same comfort. Like therapists or pastors, mediums offer reassurance about life’s hardships. “There’s lots of similarities [between Spirituality] and any and all religions,” says Warren. “Everyone finds themselves in different ways. Mainstream culture needs to start accepting that.”

While witchcraft may be a bit more mundane than pop culture would have us believe, it’s anything but boring. Traces of magic and unexplainably meaningful connections can be found all around us. Just remember, “Magic is only as powerful as you let it be.”